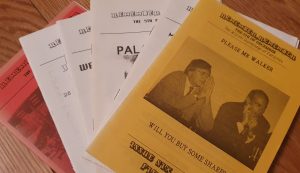 For many Charlton fans its a football tradition that rates alongside a pre-match pint, a halftime pie and a post match post-mortem over another pint. It somehow defies the technological world we live in today, a world where social media, podcasting, blogging and vlogging offer alternative viewpoints of our club. To some it competes, to others it compliments the official matchday magazine (or programme to most of us), it is of course Voice of the Valley that recently produced its 157 edition. Slickly produced, glossy in feel and packed with contributions from the journalistic talent that follows our club, todays VOTV, the ‘independent Charlton fanzine’, is a far cry from when it first appearance outside Selhurst Park in the spring of 1988.
In no small part down to the quality of its writing, for over 30 years it has remained relevant throughout the struggle to return to the Valley, to the more recent ‘Duchatelet’ years. Most importantly it remained true to the golden rules of football fanzines, namely to ‘capture the terrace humour not found in official programmes or dedicated football magazines’ and to represent ‘the need for that independent view and scrutiny of unscrupulous owners, as important as ever’.

Though the original supporters clubs newsletter, The Red Robin first appeared in November 1955, todays fanzine culture burst onto the terraces in the late 1980’s. Witty, sarcastic and fiercely unofficial they summed up the feelings of the moderate football supporter during a time that saw an seemingly endless cycle of increased football violence, press persecution and frequent draconian regulation being introduced across the game.
Though only VOTV survives, there were a plethora of fanzine options for Addicks, a large collection of which we hold in the museum today. Among ‘the rest’ the A4 sized ‘Lennie Lawrence’ ran for just 2 editions and proudly boasted itself as ‘The Simod Cup of Charlton Mags’, it offered the tempting prize of a VHS video tape of ‘the early cup finals’ for the best article received. Its second edition contained an additional fictional program (mimicking the official program in design if not content), between Charlton and an England XI. It used this format to satirically comment on the country as it was then, in ‘Meet the Manager’, Margaret Thatcher was described ‘thought by many as an evil dictator, and by the rest as simply a dictator, Margaret has turned a once prosperous nation into a deeply divided state’. Other consistent targets of its humour were Colin Moynihan, Millwall, Crystal Palace and Steve Dixon. Even the players were not safe, St Andrews hero Peter Shirtliff had his own cartoon strip entitled ‘Late Tackle’ whilst a ‘let’s speak Flanaganese’ poked fun at our ex-strikers coaching skills.
Lasting a whole 7 (seven), editions ‘Addickted’ also followed the A4 format, priced at just 5p it first appeared in May 1989 (as edition 670, a joke that ran throughout its life and confuses collectors today). With articles including ‘My Favourite Burger, by Ralph Milne’ and ‘Collect-A-Card, Dead people in history and who they support’ (who will ever forget that the father of modern Turkey Kemal Ataturk favoured Mansfield Town), it appears to have bowed out in October 1990, just as the Berlin Wall came tumbling down declaring itself as ‘the magazine that farts in the face of German Unity’.

Grasping the popularity of the fanzine culture, the Charlton Athletic Supporters Club magazine rebranded itself in the Spring of 1988 as Valiants Viewpoint, this new production felt and read like a hybrid between the club matchday magazine and a traditional fanzine. Whilst not packed with terrace humour and satire, it contained some excellent historical articles, was not afraid to criticise the club and tackled important issues rarely discussed in the official programme. One example concerned racism among our away support, summarising ‘don’t make excuses for racists, throw them out. Charlton doesn’t need them or want them any more than society as a whole.’ Twenty-Eight editions were produced, switching between A4 and A5 formats from time to time before ending in May 1994.

As a new decade dawned, 1990 saw the arrival of Robins Report, ‘published at every home match and is not written by anyone employed or semi employed by CAFC.’ It was largely made up of match reports and the regular feature Robins Comment certainly didn’t hold back in the criticism of players and management alike, ‘everyone seems to be forgetting about Lennie’s disastrous start to the season, and instead are praising him up. The thing that people are forgetting is that the ‘winning squad’ that Lawrence is playing is one he stumbled across by chance, not skill’. Carl Leaburn did not escape either, ‘When Robert Lee came off against Swindon, and Carl came on, it soon turned to grim reality, that Leaburn is a setback to the team. Why didn’t he stay at Northampton?’ todays online forums spring to mind!

As some fanzines disappeared others emerged Remember, Remember the 5th of December in May of 1993 ran for six issues, in a post Selhurst world its satire was mainly aimed at Crystal Palace, contained a refreshing focus on away games through its away dayz feature and saw the return of Ben Hayes Henry Irving Column. Goodbye Horse lasted longer running through to 2003, by the late 90s editor Andy Lopata had established a glossy A5 format, it offered a subscription service, featured advertising and certainly rivalled the official program for interviews and content.

Terry Smith’s V.F.R. appeared in April 1995 it recognised the emerging fantasy football craze, ran a regular crossword competition and was full of both Millwall and Crystal Palace jokes. Sadly missing from our museum collection are copies of the rarer Valley Volley (98/99), Anorak Addick (2009) and Leaburn Scores (1989), whatever the future holds for independent fanzines, they provide a fascinating insight into how we, the supporters felt at that point in history. For that reason alone they make up a valuable historical resource, if only Sports Pages in Charing Cross Road still existed, I could pick up the missing back copies.
Clive Harris