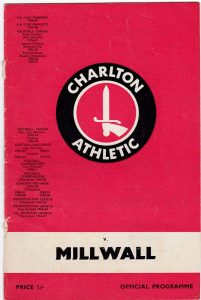 As last season ended with such a dramatic finale, we rightly praised our popular management duo of Lee Bowyer & Johnny Jackson as two of our own. ‘Charlton through and through’, they are both undoubtedly easy for us to relate to, as supporters we know they understand what makes our club tick and how to play ‘the Charlton Way’. This is backed up both the results on the field and the vocal support the side has received in the stands this season.
True Addicks need no reminder that Lee and Jacko are not the first Charlton ‘Legends’ to manage our wonderful club. In recent years Chris Powell, whose popularity in SE7 remains unfaltering, led us to a spectacular League One title and Championship respectability before his tenure was cut unceremoniously short. Before Chris, Mr Charlton himself, Keith Peacock led the team for a solitary cup outing at White Hart Lane in 2011. Reaching further back in time, an energetic, youthful Keith was an established first team regular when, on the 10 August 1968, the new season opened in glorious summer sunshine and saw the Valley welcome our near neighbours Millwall. On that day it was another Charlton legend that was it the helm in what would become a very memorable season, Eddie Firmani had over the summer been rewarded with a new three year contract and when unveiled as permanent manager in September 1967, announced, ‘this is the greatest day of my life. I can’t believe the news myself; I believe this club can become great again. I have always been devoted to Charlton because they are the club that I owe almost everything to’.
Expectancy among the Valley faithful was not particularly high as a new season dawned, a 16th place finish the year before led to two summer additions in Jack Burkett from West Ham (who would go onto make 8 appearances for us) and Brian Smith from Stirling Albion (who would make none). It was to be the popular strike pairing of Matt Tees and Ray Treacy however who would share 25 goals and help push the Addicks to a 3rd place finish only narrowly missing out on promotion. In addition, there was a memorable FA Cup victory at Selhurst Park that led to an equally memorable visit in the next round to Highbury, where, despite being defeated by Arsenal, a huge and extremely raucous away following swelled the 55,760 crowd.
Returning to the opening day, the program reminded the supporters that their opponents and local rivals had recorded their highest ever league finish the previous season (7th) and that ‘they owe quite a lot to the encouragement of their fans’. The club notes continued somewhat patronisingly to say ‘We know that you will cheer for Charlton this afternoon, but why not keep it up throughout the year. You’d be surprised how it helps’. In fact the crowd of almost 27,000 that Saturday did keep up the support throughout the year, a season average of just under 18,000 saw an increase of 29% on the previous year . Twice the Valley attendance topped 30,000 against Derby County and Crystal Palace who finished first and second above Charlton respectively.
It was another article in the matchday program that really caught the eye headlined ‘Millwall Haven’t Beaten Charlton for 35 Years’ by Tony Pullein, Charlton were in fact on a run that had last seen them witness defeat in the South London ‘El Classico’ way back in March 1933, a statistic that seems unfathomable to Charlton fans today. Pullein, appears a somewhat eclectic journeyman writer who penned articles for the matchday programs up and down the country including Bournemouth, Orient, Bolton Wanderers and Manchester United around this time, on each occasion he refers to the home club as we! One wonders if his inflammatory boasting over our Bermondsey rivals led to the almost curse like record we have had over Millwall since?
The match was refereed by the experienced and top class official Leo Callaghan, hailing from Merthyr Tydfil (where he lived in a house named ‘Offside’), Callaghan had been the man in black for the previous year’s FA Cup Final where Jeff Astle had scored the winning goal for West Bromwich Albion over Everton. He had also officiated in a number of 1966 World Cup Games including one involving the notorious Uruguay side so was well placed to oversee a fiery Charlton v Millwall derby.
The game started well enough for the Addicks with Keith Peacock opening the scoring after just 2 minutes, Bryan Conlon equalised on 13 before Derek Possee scored to give the visitors a 2-1 halftime lead. A quite incredible four-minute spell just after the restart saw goals from Keith Weller (48), Ray Treacy, (49) and a further strike from Possee (51) as the score swung back and forth to make it 4-2 to Millwall. Charlton pressed and pressed and were rewarded by a Harry Gregory goal in the 75 minute to set up a grandstand finish, but, alas our unbeaten run against Millwall was broken.
The away side had been inspired by a dazzling Keith Weller performance that led the reporter Harry Langton to describe him as a ‘a side-whiskered Cockney Wizard’. From the home sides perspective, manager Eddie Firmani put the defeat down simply to ‘defensive frailties’.
For my part, well I was born just a week later and sadly Charlton have seldom beaten Millwall since. Perhaps, should we ever finish the current season, Lee Bowyer and Johnnie Jackson will once again re-new our acquaintance with Millwall and change all that, after all they are Charlton through and through and know exactly what the fixture means to us right?
Clive Harris