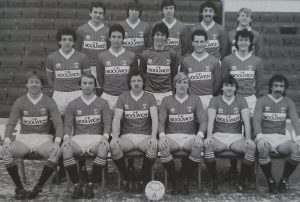 Today can follow our teams fortunes via tablets, apps, 24/7 dedicated sports news channels, streaming services, internet forums, red buttons and of course, the best option of all, in the flesh.
Live commentary, goal updates, breaking news and matchday information is readily available at our fingertips whether we are in Woolwich or Woolloomooloo meaning we are just a smartphone away from elation or heartbreak every given Saturday (or Friday night/Sunday lunchtime due to modern day TV scheduling).
Way back in the now distant ‘mid-80’s’ the media world was a very different place, one ruled by the vidiprinter, Ceefax, the extremely expensive Club Call service or Brian Butler’s unforgettable tones.
A recent foray into the dreaded loft, briefly transported me back to those days and, a unique service I was afforded by a good mate and fellow Addick (who shall remain nameless should they recognise themselves reading this, GPDR and all that). I was surprised to discover a bag of letters, neatly folded and lovingly kept, they were written to me during the 84/85 season, a time I had just left home aged 16 for the Army Apprentice College in far off Harrogate. They provide wonderful insights into the fortunes our club as each contained a match report together with matchstick man drawings of the goals allowing me to relive the drama from far away. One memorable game in particular stand’s out and has been reproduced here. 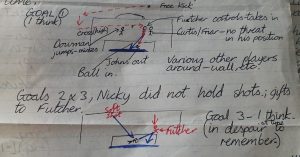 2/3/85 – Charlton Athletic V Barnsley
It was one of those games where you lose your voice, my heart was still beating hard at Charing Cross Station! Anyway 3-0 down by 3.20pm – Futcher hat trick. His goals as I remember them

Now for our goals – all headers (one penalty) and what lovely goals they were!
No1 Mr S Dowman, after 30 mins (according to the Sunday Mail but later I thought), at the away end from a corner, some respectability at least we thought. Before this goal chants of ‘Killer, Killer’ as he was on the bench, he came on at halftime (no explanation needed but to younger readers our hero Derek Hales), I was surprised actually that the crowd stayed behind the team in the 1st half but some were undoubtedly making for the exits after 3-0 (good riddance to them).
49th minute Robert Lee, set piece I think, 3-4 yards out, Hale’s draws 2 defenders and Lee rifles it straight to the top back of the net, 2-3 and a real chance of a draw in sight!
Just as the crowd was getting excited a PENALTY TO BARNSLEY, I could see it coming, it was inevitable Flanagan brought a man down in front of their 60-80 supporters……But they missed it skied over the bar! With the next attack Madden broke crossed to Flanagan, powerful header 3-3 the crowd erupted and didn’t stop singing for the rest of the game.
Now Barnsley got a bit dirty, Futcher was suddenly sent off for arguing with the linesman, the Covered End rises, from then on Barnsley’s defence was roasted, even without Towner, Madden especially on the right wing. Next a goal bound Hales Header was handled and a penalty, Ronnie took it to universal surprise and scored. Finally….

You missed history I am afraid, the game ending 5-3 in front of a small crowd 3,86? But I spoke to a Barnsley supporter, a recently striking miner, on the train into Charing Cross.
A quick check of Colin Cameron’s excellent Home & Away shows how accurate my reporting pal was, it confirmed the goal scorers as Dowman 30,78, Lee 50, Flanagan 62 & Moore 73. The crowd as a paltry 3,832.
Just two months later, my first leave came up and on 6th April 1985 I made my way to London Bridge to meet my letter writing pal, we strolled hopefully, innocently, through the Valley turnstiles only to be handed a flyer informing us that would be leaving the valley for good. We would never be quite so innocent again and the ‘stickman match reports’ became a thing of the past.
We last met a few years ago at a protest, I hope he still goes or looks for our results, I can well imagine now his stickman version of Patrick Bauer’s Wembley Winner, up the Addicks!